Colm made contact with the skipper the Wednesday before the weekend to be told “‘Course we’re on, weathers lovely up here, not sure what it will be like at the weekend though!” And that was enough, we were off to The Farnes for the first time in a few years.I’m not going to mention the weather anymore in this report, just to say suncream was required and the sea was flat, until Colm drove the boat that is!

So, Friday afternoon some of us met up and travelled up in convoy via Sainsburys to get some provisions. Just over three hours later we were pulling into the driveway of the Farm…. a Five star farm ? Wrong driveway. But a little further on was our bunkhouse on Chatton Park Farm in Chatton, about 15 miles from Beadnall. It had felt odd turning left off the A1 taking us further from the sea, but all was well as the bunkhouse was well equipped, clean, good showers, big kitchen with an original forge. Here we met up with Mark and Frank who had had a few hours longer drive than us and had stoked the fire and stocked the fridge.

Jill cooked tea, the carrots in the Spag bog were soon forgotten as we tucked into homemade Apple crumble as well. The idea had been to stay in Friday evening but we thought we best check out the “5-10 minute” walk down to the pub. Twenty minutes later we were in the bar with seven creamy pints of guinness. Nice warm pub with good looking menu so we booked in for our meal on Saturday night. It took some doing, but Kieran was eventually persuaded that sleep was a good idea with having to be at Beadnell harbour for 07:30. The walk back from the pub was stunning with no light polution thousands of stars (and Mars) could be clearly seen and back at the bunkhouse having a beer was Kevin who had driven up late due to work, so we joined him in one. 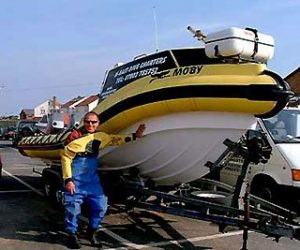 Skipper Graham, with his 8m boat and 250hp engine.

Six in the morning came round abit too quickly for some who had struggled to sleep with others snoring away. But that didn’t stop Jill getting up and starting the bacon and boiling the kettle. Bacon butties all round and a few with eggs too. We were under orders to have washed up before we left, so we did and off we went. Half a mile away we stopped whilst Jill went back to the bunkhouse for her dive computer (well at least it wasn’t regs or bottles this time.) The twenty-five minute drive would have been quicker if we hadn’t had to stop for three trains at a level crossing – at that time in the morning! Still, the drive took us past the beautiful Bamurgh castle.

Met up with the skipper in Beadnall harbour and kitted up and loaded the boat whilst waiting for the launching tractor. Important man as he also has the keys for the carpark toilets. The skipper, Graham, from Farne Islands Diving Charters, had his boat launched soon enough with his son Thomas helping, us in it and out to the Farnes in no time. Took about 18 minutes to do the 6 miles to our first dive site on the South-East side of Longstone, The Hopper.

“Fantastic dive” came all the reviews from all the divers, apart from Ged who had ripped his neck seal and was soaked. Playful inquisitive seals, loads of lobsters, an Octopus for 2 buddy pairs, conger eels, many different fish and various crabs. The three gullies were explored by most of the divers in excellent viz. The skipper had put us right on the first one and gave a good briefing of what to expect. 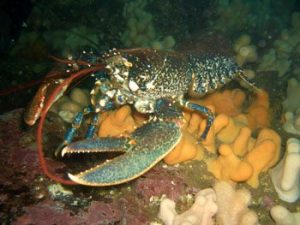 Lobster – one of the many seen

Bottles were swapped in the surface interval and the skipper provided some food and drinks to complement the things we had taken on board of our own. The afternoon dive was just as good as the morning. Staple Island, east of three pinacles on a lovely, covered wall. Following it along you came to some plate wreckage and then the two large boilers of the St Andre. More playtime with seals as well as loads of sea life.

Back on the boat, we were soon all back in the car park loading up cars and off to Sovereign divers to get the bottles filled. But they were still out at sea, after all it was only 2 o’clock. Nothing for it, off to the pub we went to sit overlooking the sea in a good beer garden in the piping hot sun. We got back upto Sovereign just before they opened, but were already in a queue behind a PADI school with lots of bottles. As we had already rang him though, and there were only 8 of us, we got our bottles done first (thank-you) which was a bonus as there were many more trips turning up to get lots of bottles done. Back at the bunkhouse it was kip time for some, a beer in the garden for others and just a nice relaxed early evening.

All showered and down to the pub for 7:30 meal. A brief moment of getting mobile signals brought various beeps and sounds and more importantly the football scores were learnt. Not sure if The Percy Arms was ready to cope with 8 of us in one go as well as their normal Saturday evening trade but the food was really good and the kitty lasted

Sunday morning was an early start again with much the same procedure as Saturday, though having to pack up and load up the cars as well. The best idea was to get out of the bedrooms and try not to go back in, not sure if it was the seven men or the one female that had contributed to the depleting
ozone layer! Launch procedure was the same, and if anything, the sea was flatter. The skipper had leant a dry-suit to Ged, it fitted well and he was happy he was diving again.

This mornings dive was on the southern tip of Longstone. The skipper dropped us in so that we could swim along the vertical part of the reef as we descended. And what a reef wall it is, covered in a multi-tude of sea life, crabs and other small critters. Looking up it in the 15-20 m viz was quite impressive. The turning point came at the prop and rudder (with large cod underneath) of the Chris Christenson and the lazy swim back was eventful for playing with the seals – again ! Frank was ridiculed into returning the lobster he had brought up, yes, things do look bigger underwater Frank!

Later in the morning, we dived The Hopper again. The skipper put us in on the middle one and as soon as we dropped a few meters Kevin and I had seals playing with us. At one point we had six in front of us, some staionary but two really playful ones. Nibbling fins, following us around and accepting us tickling their chins and even “shaking hands” with one. Fantastic. Warm clear water, and loads of other things to see too. Things keep coming back to me like the shoals of fish there were around, congers hiding under plating off wrecks….. and being on my second dive of the day by 11 am !

The weather held, the diving and accomodation were excellent, the company good, the distance not too far and the snoring is a distant memory. Nice one Colm.