We joined the Trafford branch of BSAC in October last year (2001). Throughout the winter we attended lectures at Urmston Cricket club, took theory exams and trained every week at the pool. By the time February/March arrived we were desperate for some open water action, especially having bought loads of kit which had just been sitting there in the living room at home. It wasn’t until April we managed to get on our first training dive and we found out this was to be at Capernwray in the Lake District. We excitedly assembled our newly purchased gear the night before, it took about 3 hours to pack everything!

Too cold, boring, no life, quarries are no good everyone said, undeterred we ignored everybody and decided to find out for ourselves. We met at 10.00am in the car park and were greeted by an official who asked us to register at the main building. One of the other trainees, Tony, was there waiting also. Dave Godson helped us register and two instructors Debbie Robinson and George Shellard proceeded to show us the best order to kit up in. It took about another 3 hours to unpack and put everything on. We found putting our second-hand Neoprene drysuits on quite a chore and diving was beginning to seem a lot of hard work-we were hoping the rewards were yet to come. However, there was then a long walk to the quarry’s edge to negotiate wearing and carrying all our equipment (OK-it was only 100m!). We were later to find, that if it seemed heavy at the start, it was twice as heavy at the end when walking back to the car with wet kit. 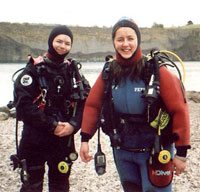 George (yes George is female!) taking in Jenny Debbie taking in Pete There were already a considerable number of divers both in the water and at the waters edge. We put the remaining gear on-hood, mask, gloves and fins. At this point, Jenny realised her second-hand Neoprene drysuit was too small and that she could not raise her arms above shoulder height which proved disadvantageous when trying to put a mask and hood on and made mask clearing underwater seem very daunting. The suit also restricted her ability to get anywhere near her feet and so she had to have help putting her fins on as well! Our instructors then gave us a dive briefing and helped us adjust our weights. Finally, entering the water we finned to the 6m platform and descended into the abyss below leaving the yellow sunlight behind.

The first thing Pete noticed was how calming it was underwater. The first thing Jenny noticed was that descending to 6 m without sufficient ear clearing was very painful and she shot back up to the surface! A quick ear clearing lesson from George and she was back down there. After some buoyancy tests we then navigated to the Lord Lucan and Dreamer (a couple of day boats that have been sunk in the quarry). We passed many other divers and it seemed almost busier than Sale Town Centre on a Saturday afternoon! Gradually we came up following the quarry floor, on the way back we spotted some divers feeding trout, the fish were huge and very inquisitive. This was our first experience of fish swimming past our heads!

After a surface interval of a couple of hours, some sarnies and a ‘B’ part in a rescue training exercise we re-entered the water for a 2nd dive. This time we did a stride entry off the pier which was immensely enjoyable. One moment you are looking down, the next breathing underwater with fish swimming about you, it was an eerie feeling. We approached the right-hand wall of the quarry and glanced upward from about 10 meters. As we looked up, the wall seemed to tower into the distance and shafts of sunlight were dancing through the water. We heard, then watched our bubbles ascend to the surface and felt a warmth of calm inside. We are sure most divers must have felt this and probably take it for granted, or have forgotten. The rewards of diving were starting to become apparent. 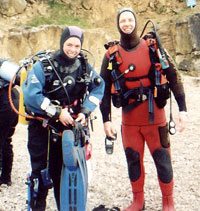 After getting lost amongst the stirred up silt we decided it was best to ascend and did so directly to the surface. It seemed that from about 3 meters the whole water around us erupted in a bathing light and the sounds of bubbles seemed ever more present. Upon surfacing we found we were almost at the other side of the quarry and had a long surface swim back! After the long walk back to the car, more trouble with the dry suits became apparent-they were not keeping us dry! We had therefore learned so much from this first open water dive-the new sensation of breathing underwater, the importance of ear clearing and that our second hand dry suits were a complete waste of money! We thoroughly enjoyed our dives at Capernwray and would like to thank Debbie Robinson and George Shellard for their time and effort.