A Trainee’s introduction to UK diving!

The early arrivals managed to sort out their gear, etc in time to grab a curry before catching up with the rest of the group at the Oban Inn on the Friday night. 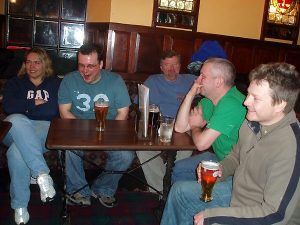 Rachael, Stuart, Paul, Stuart and Andy in the Oban Inn

On the Saturday morning; after coffee and the option of porridge and/or toast on board the Gaelic Rose; – the trainees experienced their first sea dives on the West side of Lismore Island in Loch Linnhe. The Buddy Pairs were Neil and Peter; Andy and Paul B, Rick and Paul T; the two Stuarts; and, as there were more instructors than students (luxury or what?) Rachael and Jen.

The Buddy Pairs with trainees kept to the ledge, while Jen and Rachel recovered some Scallops at about 27m. Seeing kelp, squat lobsters, long-clawed lobsters, sea urchins; crabs and the like in their own environment; rather than just the bottom of the swimming pool at Urmston Leisure Centre was an amazing experience. The sea felt considerably warmer than Capernwray the weekend before. 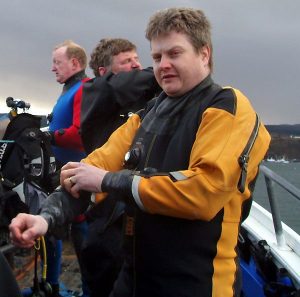 A hearty breakfast on board (with some swapping of Black Pudding and Tomatoes) was followed by a couple of hours’ rest before the second dive of the day, at Calve Island outside Tobermory in the Sound of Mull. Again, the visibility was good, the marine life fascinating and the dive was thoroughly enjoyed by all.

That night, after a full roast dinner (with vegetarian option and an incredible dessert) prepared by Lee in the galley on board the Gaelic Rose; the trainees were introduced to the ‘Gaelic Rose Peak Flow Test’. A fiendishly clever way of showing trainees and even ‘experienced’ divers that there is a lot to learn and remember.This was followed by a return to the Oban Inn punctuated by a walk around Oban to find ‘the music pub’and periodic checks on the progress of the Lunar Eclipse. 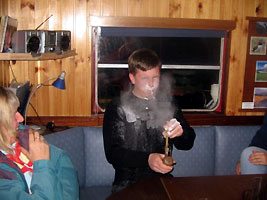 Peter Johnson learning how to use the talc pipe!

On the Sunday Morning, most of the group dived to the SS Breda (the trainees’ first wreck) which was followed by a dive off Heather Island in the Sound of Kerrera. 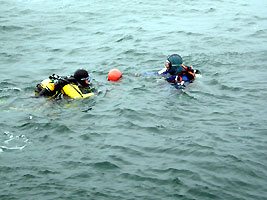 Peter Johnson and Neil Smitham at the shot on The Breda

Overall, a fantastic weekend, which proved to the trainees that UK diving is not all about Quarries, Car parks and Clubhouses; and there is a great deal of fun to be had above water.

Thanks again to the ever patient Instructors as well as Bob and Lee on the Gaelic Rose for a truly memorable weekend.

Advanced Diver and Open Water Instructor, I am also the TSAC webmaster, contact me if you need help with anything on the website or have suggestions for new content.