The Launch of Nessie by Michelle Pryke

This was to be the maiden voyage for the new club RIB, aptly named Nessie in my opinion due to its size. The boat is 5.8m in length and 2.5m wide, not including the trailer. Fortunately the residents near Dave & Connie’s must be RIB friendly people as they kindly agreed to park their cars on one side of the road whilst Nessie was kept there overnight. 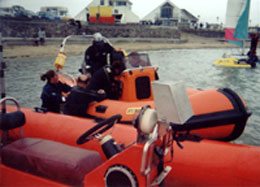 Following an early start on Saturday morning everyone met up at Treardeur Bay. We must have looked a very keen RIB diving club as we had three boats between us. After a few initial teething problems with Nessie, all three boats were launched and ready to go. For the trainees Jenny, Pete and Tony it was the first time they had dived from a RIB, so this was an opportunity to learn new skills. Only the “Missouri” was dived on Saturday and Conger Eels, lobsters, nudibranch and plenty of fish were the order of the day. There was plenty of opportunity for people to have a drive of Nessie with Jill on hand to offer expert instruction. I think some people enjoyed being on the boats more than the actual diving! 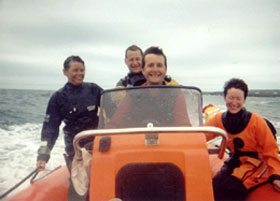 It was a camping weekend so we went along to Bagnol Caravan Park on Ravenspoint Road looking for room for three boats, five cars and twelve divers. We were eventually given a field all to ourselves so set up camp and got the BBQ’s going. Andy may have to be banned from cooking at next year’s club BBQ as the chicken became flame grilled with much emphasis on the “flame”. During the evening Bev was horrified to see Andy eat what she thought was perhaps a rare species of yellow caterpillar, panic over when the culprit was uncovered as a cheesy NikNak!

Unfortunately the South Westerly wind on Sunday put pay to our plans of diving the wrecks of the “Hermine” and “Norman Court”. All three boats spent quite some time looking for alternative dive sites and this allowed more opportunity for boat handling experience. As people were becoming rather damp, cold and in some cases a little queasy, we took the only sensible course of action and went to the pub! 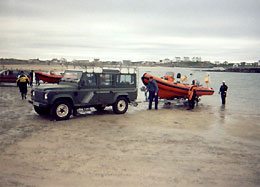 Nessie on her trailer

This was the first dive trip that I had organised that involved using charts and considering tides and wind direction. I was very fortunate to have the support of members who have much more experience than myself, namely Connie and Dave. Thanks should also go to Ian and Jill Dearden for their efforts with the boats.

I enjoyed planning the trip and feel I have learnt new skills from the experience and despite the lack of diving, all seemed to have had an enjoyable weekend.