The annual bank holiday trip to Plymouth has not run for since the retirement of Richard and his classic dive boat, The Ceeking.
This year we returned with the Mountbatten based dive centre InDeep, as it seemed time to renew our acquaintance with James and Glen.
We arrived, as is the norm on the Friday, in bursts at the Boringdon Arms and settled into our rooms, meeting in the bar for a predive weekend beer (or two) and to plan the weekend’s activities. It’s not really that hard and there was soon a detailed and exhaustive plan in place. 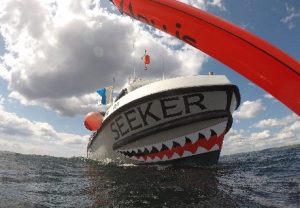 The first day looked a bit overcast and whilst the sun tried to come out, the cold wind made us wrap up warmly. The conditions meant that we couldn’t go too far, so knowing the weather was due to improve, the decision made was to dive the local wrecks first, so James Egan Layne followed by the Scylla. No problem here as these are both fabulous dives and show a contrast in deterioration, the JEL being a WW2 wreck and the Scylla a wreck purposely sunk in 2004.

Fortunately, James (the skipper) sped the dive boat Seeker to the first dive site and because we were ready quickly, we arrived at the dive site ahead of the bank holiday BSAC rib rush. First dive was the JEL, it has started to show its age and even with the plankton bloom reducing visibility down to about three metres, it still proved to be an excellent call. Most of the plating has fallen away and lies spatchcock like on the seabed, however many of the ribs are still intact and provided stunning views with light streaming through the gaps. 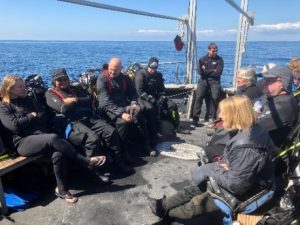 There is so much life on this wreck; if it can be found in British waters, it is there on the JEL. In addition, it is fascinating seeing the boilers, winch blocks and the cargo it was carrying, my favourite being the stacked spoked wheels. While finning round we saw large schools of Poor Cod and Bib and of course the ever-present large Wrasse arrogantly swimming past, eyeing us up. Whilst we investigated the wreck, we stopped to look inside the protective nooks and crannies, where we saw the smaller, less brave Wrasse, crabs and lobsters staring back at us and a Conger tucked away glaring balefully at us from its dark haven. Sadly, time has now taken its toll on the JEL but it still holds its own as one of my favourite and best wreck dives in Britain. Even better when Conan (the crew member) appeared with hot tea and hot pasties.

Our second dive was the Scylla, a different wreck altogether. We dived down the shot line attached to the bridge and dropped off to swim along the intact hull, descending to about twenty metres. It is now covered in Plumose Anemones and has become a marine haven. On this dive we headed up to the deck level and had a swim through some of the open rooms. These still lack any substantial marine life but are slowly beginning to accumulate a few small anemones. Afterwards we circled the deck and gradually ascended taking in the views and peering inside the ship, finishing off at the bridge we released the SMB and surfaced.

Two very enjoyable, yet contrasting wrecks, a good start to the weekend finished off with a plate of cheesy chips at the Mountbatten marina café. 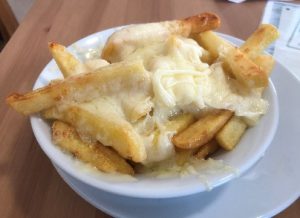 Day two dawned and the sea was flat calm with sun streaming down, perfect conditions to head out from the sheltered coastline and take in some of the more distant dives. We headed out to my favourite ‘reef’ dive Hand Deeps and as we sped onwards, a school of dolphins joined us for the hour’s journey. We arrived just before slack and made our way down the shot line to the kelp forested summit of the Hand Deeps pinnacle. Following James’ accurate description, we headed SW and found the drop off. This was going to be a different dive, visibility had improved to 8 – 9 metres, if not better. We stopped at 20 metres and a dogfish swam up and settled down in front of us, waiting for me to take a quick picture on my GoPro, what a start. Keeping the wall to our left, we began to swim along descending to 30 metres and stopping regularly to admire the stunningly anemone bejewelled wall. It was amazing, walls carpeted with hundreds of orange, red and purple jewel anemones. Even better, those clinging to the overhangs were all open and feeding, an absolutely stunning sight. Scattered in amongst them were delicate pearlescent nudibranchs, crabs, juvenile cray fish, lobsters and all the fish imaginable. We rounded the pinnacle and as we ascended the tide began to run, so the ascent became a gentle drift dive to summit where we decided to release the SMB rather than fight the tides to find the shot line.

With visibility great and the sea and weather conditions perfect, we decided to stay out and visit the Eddystone lighthouse for our second dive. This is not my favourite dive site, but its setting is amazing. It is quite simply a dive around the reef and rocks surrounding the lighthouse. Today was a wonderful dive. After another comprehensive briefing from James we descended straight off the boat and down to 14 metres. The visibility was again over 8 metres, which gave us an opportunity to explore the area and see fish schooling around, keeping themselves just at the edge of sight. Once again, all the usual marine life was in attendance but by looking into the nooks there were several large lobsters and a Ling hiding away in its cave. Most notable was the masses of Sea Cucumbers scattered over the rocks and the large Tompot Blennies that didn’t run and hide. Once again, a really enjoyable dive. Back to cheesy chips.

In the pub that night we decided against the SS Persia and returned to Hand Deeps. The visibility was once again excellent and this time we kept the wall to our right and headed down to twenty-five metres, stopping to admire more walls of jewel anemones and more nudibranchs. Ascending to eighteen metres, we encountered first one then a second dogfish, this continued, and we stopped counting at five. I had not seen this many gathered together on Hand Deeps before, and then to finish off we encountered a couple of large Cod. Another great dive.

The final dive was on our way back to the jetty, the Glen Strathallan, lying just outside the harbour’s breakwater. This is a good way to finish off the weekend, close to the harbour and a large boiler with plenty of plating to investigate. Sadly, as we descended the visibility reduced to about two metres. We manged thirty-five minutes before ascending but still investigated the plating and the boiler, finding an annoyed lobster that turned tail and stalked into the dark. A small Tompot stared morosely out at us from one of the boilers tubes and the only Conger I found had retreated to the deepest darkest recesses, so I only got a glimpse of its head.

Heading back for to the jetty to pack up I reflected on the weekend. Was it a success? Did we enjoy ourselves? 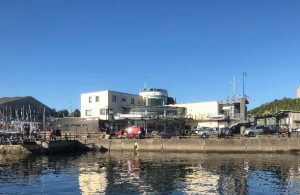 The InDeep dive centre are excellent, our package included accommodation, six dives and six fills. The communication from James and Ben was excellent and the fact that the dive team ran the trip based on what we requested meant we had an easy and enjoyable time.The dives were enjoyable and restful, with good planning, good briefing and a team that welcomed us onboard. 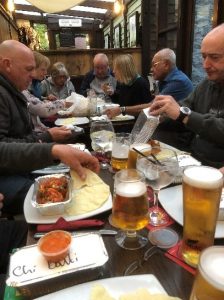 The accommodation was excellent. It is a pub that looked after us. They set out their lounge just for us on the Saturday night and on the Sunday allowed us to order a curry delivery and provided us with plates and cutlery. The breakfast was hearty and tasty, the rooms warm and comfortable.
Even the M5/M6 journey wasn’t too bad.

We are going back next year!